Make Higher Resolution YOUR Resolution : A Primer on the Many Faces of HD

Look at that beautiful picture!  That all anyone wants to think when they look at their computer screen, isn't it?  But what most people don't think about is what screen resolution they're actually running - HD is HD right?  Well, not exactly.

Let me preface this by saying I'm a fiend for resolution.  I love having a huge screen with lots of desktop real estate.  What does that mean exactly?  Well I'm glad you asked.  Resolution is generally measured in horizontal and vertical pixels.  The most common resolution you're likely familiar with is the Full HD 1080P resolution which is 1920x1080.  Not following me?  Take a look at this handy diagram: 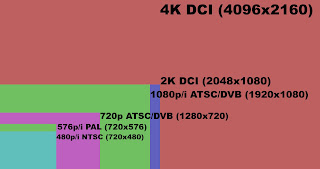 See that big old number in the top right?  That's the 4K you've been hearing about lately - and it's like having four 1080P screens in one!  Wait, that doesn't get you all worked up?  Maybe I need to break it down for you a little further.

If you're got a run-of-the-mill 13-15" PC laptop, you're probably running 720P resolution.  Plenty good for the occasional bit of web surfing, Microsoft wording, and an occasional youtube video.  Bigger and higher-end laptops have resolutions slightly higher.  The 15" Macbook Pro runs at 1440x900, some better PC's give you 1600x900, and the really good ones can get you to full HD.  With Desktop monitors, anything over 20" today will get you 1080P, with 1600x900 on the smaller screens.  These are generally true, but for the resolution hungry like myself, there's a lot to get excited about these days.

Apple, with its Retina Display Macbook Pro's has given folks a Quad HD 2560x1440 resolution (and even higher on the 15" model).  Their 27" Cinema Displays have come standard with QHD for a few years now.  But lately, the PC brands have been getting on board as well.  Some really nice QHD Monitors have come in below $600 where they were all in the $1,000 range this time a year ago.  Even some PC laptops are coming with QHD resolution in the coming months.  Good luck trying to run 2560x1440 on a 15" screen, but hey, it's there if you want.

Next up 4K.  So there are some screens out there already.  And some really powerful video cards capable of supporting 4K resolutions.  And even a couple of 4K monitors available in the $2,000 range.  But, it's too soon.  It hasn't been standardized and will likely change from what's currently available.  The sweet thing though - it's like having four 1080P screens in one.  So if you're working on a big money trading floor, chances are you've got a few of these to watch the tickers on.  Otherwise, you'd do well to wait.

So what does all of this REALLY mean?  Well, for those of you who want to work on large graphics, spreadsheets, or just want to see tons of Google result, your time is here and getting more affordable by the day.  For you average folks who enjoy the pretty pictures on the screen - it's a pretty good time for you too!