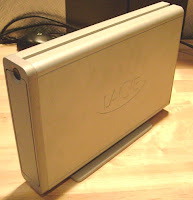 Ah, the vaunted data recovery.  Your hard drive is cruising along like a well-tuned machine on all cylinders, and then one day, poof, it won't show up.  You think to yourself, it's probably no big deal, I mean "it was working just fine a few minutes ago."  Well, yes everything works just fine.  Until it doesn't.  And your hard drive?  Well, it doesn't.

We see a lot of dead hard drives in the computer repair business.  Being in Los Angeles (or West Hollywood in particular), we see a highly disproportionate amount of large, external hard drives from Mac users with large stores of video data.  They typically purchase these drives from LaCie and G-Raid on display at the Apple Store.  All their important data winds up on these somewhat suspect drives.  And at a higher than average rate, the drives go belly up.  One of the biggest offenders is the LaCie "Big Drive."

So what is the "Big Drive."  Well it's big because they stick two large hard drives in it and configure it for RAID 0 to have it appear as a single large drive when you connect it to your computer.  The two drives also make it about twice as big as a typical external drive.  Yeah I know, LaCie really went out on a limb with the name.  And that's great if all you care about is having a relatively large amount of storage space while not caring as much about reliability.  'Cuz here's the rub - if one of those drives fails, the whole thing fails.  Now if you're one of the lucky ones who bought this thing and only had the enclosure fail, despite its configuration, the data is recoverable.  And I'll show you how.

First things first.  You'll need to get the drives out of the failed enclosure.  It's pretty straightforward so I'm not going into detail on that here.  Once they're out, it's a good idea to clone the drives to another drive to work the recovery.  There are a million different reasons to do this and it's generally considered best practice, but if it's not an option for you, be extra cautious when you get to the latter steps.  We use a handy (and expen$ive) device called a PSIClone from CPR Tools that helps us get that done quickly like so: 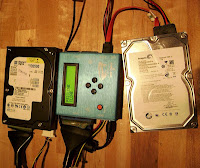 Once you've got the drives cloned, time to hook them up to your computer.  For these we use a pair of eSATA docks hooked up to a Mac Pro, but plain old USB will do the trick, albeit much slower.  Now the software we found to successfully rebuild a RAID on a Mac is R-Studio from RTT Tools.  There's a free limited trial available before you commit to buy it (it's around $90, but well worth it)After you've got the drives connected to your Mac, Disk Utility will ask you to initialize the drives.  DON'T.  That'll likely get your data lost for good.  Launch R-Studio and you should start with a screen like this: 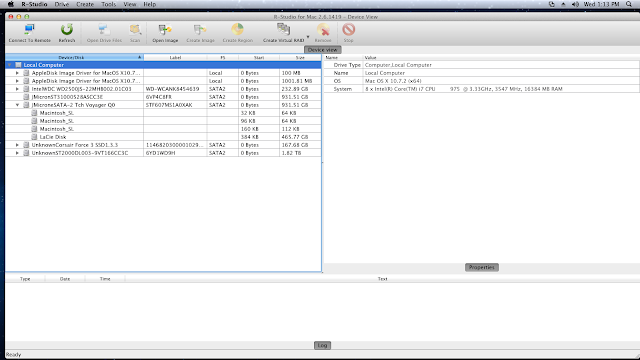 From here you click the "Create Virtual Raid" and select "Virtual Block RAID" as the type.  Drag your drives to the Virtual RAID, select the correct block size (in this case it was 64K), and you should see the Big Drive partition in the left pane like so: 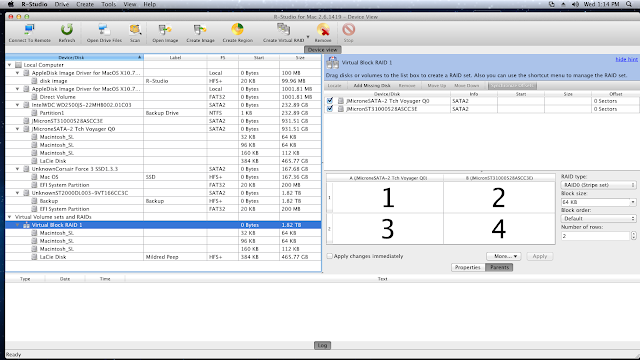 Double-Click on that partition, in this case it's the one labeled "LaCie Disk" and your files should all be there.  Now wasn't that a snap?

Well not really, but you get the idea.  Like that tool Kevin Garnett once hysterically screamed "ANYTHING IS POSSIBLE!!!!!!!!!!!!!!"  And if this doesn't sound like something you'd like to tackle, I've got a recommendation for the best data recovery in Los Angeles, if you catch my drift.

So Dear Reader, if you were one of the unfortunate souls who unwittingly bought one of these ill-conceived disks, all is not lost.  Recovery is even highly likely.  But if you're in the market for a new drive, stay away from these and always remember, the only safe data is data you've got multiple copies of.