She looks and feels the same.  Still there by your side when you need her.  Still getting it done.  But there's something.  You can't put your finger on it, but you know things just can't go on like this.  You're not quite ready to let her go, but you're at a loss as to what to do . . .

But fear not Dear Reader - I have all the answers to your technical queries.  Whether it's a PC, Mac, Desktop or Laptop there's way to get her up back up to speed.  And what I'm going to is break down the easiest ways to breath new life into the old mare of yours and turn her into a legitimate War Horse!


Now let's start with a little disclaimer first - if we're talking about a 6+ year old computer, my suggestion would be to ride her 'til she bucks ya because it really isn't worth putting much money into something that old.  What can benefit something older like that would be to try and tackle any potential software (ie - re-installation of the OS) issues first, but if that doesn't do the trick, it may be time to move on to greener pastures.  Really the main areas you can upgrade beyond software are the RAM, Hard Drive, Graphics, and CPU.

RAM is typically the easiest and less costly upgrade you can perform.  RAM prices, despite some recent increases, are still very reasonable and an upgrade can quickly breathe some new life into your older computer.  It's not the be-all-end-all, but if your computer is struggling, especially while trying to multitask, RAM may be just what the Dr. ordered.

Next take a look at your hard drive.  If it's too full, failing, or just plain old and slow it's going to seriously impact system performance.  Getting a newer and faster hard drive can work wonders.  The one thing I can't recommend highly enough is a Solid State Drive (SSD).  These things are LITERALLY thousands of times faster than their mechanical counterparts and can turn a sluggish old machine into a powerhouse.  Not to overblow their significance, but we've seen several year old machines with SSD's blow their brand new counterparts out of the water.  You will need to clone your OS over to the SSD or perform a fresh install, but trust me, it's sooooooooooo worth it.  If your budget allows for it, I'd hurry up and get yourself set up with one.  You can thank me later.

Look these next two upgrades, Graphics and CPU, aren't really available for anything other than Desktop PC's, Mac Pro Towers, and a very limited number of laptops.  They're also some of the priciest upgrades because they have the most impact.  Besides upgrading to a SSD, the Graphics and CPU have the largest all around impact on the performance of your computer.

Upgrading the Graphics card, especially for gamers, makes a tremendous difference.  Bottom line - if you're gaming or doing graphics work, you practically have to upgrade the graphics card on a semi-annual basis.  AMD and nVidia are the two major chipsets and, without getting into too much detail, the higher the model number, the better the card (look for the last two digits on an nVidia card and the last three with AMD).  You'll also be able to run higher resolutions and power multiple monitors with a better card.  In any case, off loading the graphics from an on-board chip to a dedicated card benefits the entire computer. 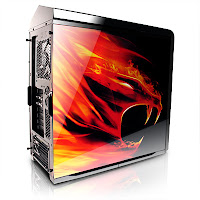 And finally the CPU.  The heart and brains of a computer.  Other than a relatively minor upgrade, you'll likely need to upgrade your motherboard too.  Likely the RAM as well.  You see what I'm getting at here - it's practically a new computer.  And it'll feel like one too.  Because unless you've got some top technical ability or hire a tech with superior know-how you'll have to reinstall your operating system as well.  May as well throw in a clean, new, computer case and you practically have a new computer.  Well, technically, you would have a new computer. :)

Greetings Tech Fans!  Sorry to disappoint, but no, I'm not writing today about some silly new iteration of MTV's Celebrity Deathmatch, even though who wouldn't wanna see a fight to the death between the iPad and the Macbook Air?  No one?  Yeah, I 'spose that makes sense.

BUT when it comes time to pick out a new primary computing device, we're seeing more and more folks opt for some sort of Tablet device.  Now while I've always held the position that Tablets are perfectly good devices for users who are simply content consumers, the second they try to use those same Tablets to create content, they find them lacking.  Here's the gist - if ALL you do is browse webpages, read email, engage in the occasional video chat then a tablet's just the ticket.  But on the other side of the coin, if one is actually writing a document or even a lengthy email, well then Tablet's are just perfect for that too!  SAID NO ONE EVER.

I'm not even going to get into the cost benefit argument because a halfway decent PC is easily $100+ cheaper than a iPad.  Even a Macbook Air 11" (which actually does everything most folks think an iPad is capable of) is in the same sort of price range as a comparable iPad - and it, you know, actually is good for doing stuff.

So with that said, will this always be that case?  For the foreseeable future, yes.  Until they come up with some magic way of getting the ideas out of your head and into your portable tablet, smartphone, smartwatch, smartglasses, or whatever other smart thing you're carrying around in a methodology equally as good or better as you can do it on an actual computer, you're better off with an actual computer.  Sorry to any of my English or Comp teachers for that ridiculously long run-on sentence.

Now as a secondary device, a tablet may be just the gadget you need for lightweight access to the content you crave on the go.  Ever since I scored a Galaxy Note, I've had no further need for a tablet, and the writing's on the wall that most consumers won't either.  As much as the manufacturers of these things want you to buy all of them, it's really up to you if they're worth it.  You need to decide what works best for your workflow, but today, most end users are still lost without a computer by their side.

Intel at it again - Haswell is upon us!

It's that time again kiddies - Intel has released the next generation of it's flagship core processor series.  Dubbed "Haswell" - they've got several new enhancements and, of course, performance improvements that you'll appreciate in your next off-the-rack PC or custom build.  And they're available for order TODAY!  The gist of it is if you bought a new computer in the last year or so, you're probably not clamoring for something new just yet - you'd probably be better off  just upgrading to a Solid State Hard Drive.  Maybe a new Video Card and some RAM to boot.  But if you're in the market - a new Haswell-Based PC may be just the way to go.

Here are the high points of Haswell Architecture -

Basically for those of you who don't speak nerd - it's more betterer than previous generations.  Check out this Wiki if you want to know all the minutiae. Is it so much better that you need to rush out and get it?  Well if you're one of those who has to have the latest and greatest, then sure, go for it.  You'll need a new Z87 Motherboard (they use the new 1150 form factor) and Haswell CPU, but the rest of your stuff should work more or less fine with it.  Otherwise your previous generation Ivy Bridge or even earlier Sandy Bridge CPU setup will likely work just fine for you.  All the major pc components vendors should be well stocked in the components already.

But my dudes and dudettes - if you are looking for a sick custom rig, man have I got just the place for you.  Our main man Jimmy on the Custom PC build side will SO hook you up.  Not only does he love doing custom builds, he's got this weird OCD that if the cable management isn't perfect, he can't even sleep at night!  So if your looking for the best custom built PC Los Angeles has to offer - look no further.  See you when you're ready to roll!