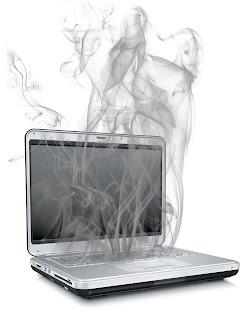 You've seen the signs and likely chose to ignore them anyway.  Your innocent PC laptop or maybe even your Mac has been emitting more and more of that whirring sound you would seldom hear when it was new.  In fact, now you practically burn off a layer of skin every time you touch your little computer after a minimal amount of use.  And then, one day, poof, the poor little guy won't even turn on anymore.  And you're left to wonder why?  WHY?  WHY?  WHY?

Well you know why - the little guy was getting hot.  Heat probably does more damage to electronic component than Mercury in retrograde.  Bottom line: Heat + Computers = Bad.  Rather than doing something about it while you still had a chance, you chose to ignore the problem and hope it would magically go away.  After all, it worked perfectly fine before (my personal favorite computer repair line).  Well yes, I used to be able to dunk a basketball, but time, beer, and chicken wings have taken their toll, and that's no longer the case.  Sooooooooooooo, while my vertical leap isn't coming back, there's still hope for that computer of your.

Now here's the silver lining to this cloud - your data is likely safe.  Unless your laptop or desktop literally caught fire before permanently crashing (and sometimes even if it did), your hard drive is probably still in tact.  Now for all but the most severe overheating issue, you can still do a lot.

First of all, think about what's making your computer work so hard.  If your computer is chugging along, it's probably heavily taxing your system resources.  The harder a computer has to work the hotter it gets.  And no, that shnazzy TV ad promising to make your computer fast again isn't going to cut it.  There are a number of steps that can be taken to optimize an existing computer, and in dire cases, a complete wipe and re-installation of your operating system can bring things back to normal.  And here's a quick tip for you Windows users - never, ever, ever, ever upgrade your Internet Explorer.  Whatever Internet Explorer shipped with your computer is the one that was meant for your computer.  New versions are made for new hardware, not for that "vintage" computer you keep refusing to retire.

So what happens if we do that and your computer still runs hot?  Well then it's likely that the computer's cooling system has been compromised.  For starters, you can try one of many laptop cooling pads out there.  The provide additional ventilation and airflow that may just do the trick.  If it's still running hot, then more extreme measures may be warranted.

Servicing a computer's cooling system, while not the easiest thing in the world, is your last option before sending your little baby to that silicon factory in the sky.  To get a better idea of why this is necessary, I'll give you a quick rundown of how a computer's cooling system works.  Your processor, and in laptops the graphics card, aren't cooled directly by a fan - it transfers heat to a piece of metal called a heat sink.  To transfer the heat effectively, a layer of thermal paste is applied to the chips.  The fan then cools the heat sink.  Over time, typically 2-4 years, that thermal paste can dry, greatly decreasing the ability of the laptop to stay cool. Doing computer repair in the hot Los Angeles summers, we see this quite a bit.

So what to do?  Take the laptop completely apart, remove the heatsink, re-apply the thermal paste, clean out any dust or debris from the entire assembly, and there you go, laptop like new.  Well not really, but it'll at least work again.  Maybe.  I mean, it's still kinda old for a computer by the time this happens.

Look the heat issue with computers is real.  How real?  2006-2008 was a particularly bad period.  Apple extended the warranty on some Mac Book Pros for 4 years just because of an overheating issue with one of its nVidia graphics cards.  Many PCs had problems with the same chipset, but the manufacturers pretty much ignored the issue hoping it wouldn't present itself until the warranty expired - I'm not naming names (cough HP, cough cough Dell), but that really wasn't the way to win over customers during the dark Vista days.

The bottom line - you're pretty cool.  How do I know?  Well, your reading the cooling blog about computer repair on the Internet, that's how!  So seeing as you're cool, with Summer approaching, just see to it that your computer stays the same.