Tech Tip of The Day - Why you need a WiFi Password 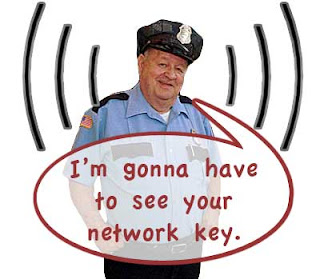 We do computer repair and service all over Los Angeles and I can't tell you how many wireless networks I see still named Linksys, D-Link, Default, or some other out-of-the-box configuration with no password. It also amazes me that people are still brazen enough to just hop on someone else's WiFi just because it doesn't have any encryption. And I'll tell you why - you're both putting yourselves at risk.

A few years back everyone was pleased as punch to find out they could now connect to the Internet wirelessly. It was quick, and easy, and they could surf the web from (most) any room in their house. It was also more secure because a direct, firewall free connection to the Internet is a one-way ticket to virusville or pwnage town, but that's a subject for another blog post. So why then did these same consumers not bother to password-protect (and by proxy encrypt) their wireless networks?

Some of it may stem from a lack of knowledge or desire to make an effort or a misguided sense of invulnerability, but if you're lucky enough to have your own Internet connection, you need to properly protected. For starters there are these 8 nasty little letter out there: MPAA and RIAA and they're after your wallet! Some would argue these are the two biggest bullies out on the net armed with a legal team bigger than most states and they're on a mission: recover their lost profits from Internet file sharers. Don't believe me? Just read this article about how the producers of "The Hurt Locker" are out to make up for their lackluster box office at the expense of peer-to-peer file sharing users. Now you may say to yourself, I don't download illegally so I've got nothing to fear! It's a nice sentiment, but if you've got an unsecured WiFi network in your house you may as well be in the movie theater yourself holding the camcorder.

How's that you say? Simple, when your WiFi network is unsecure, anyone can connect to it and do whatever they want. That includes illegally downloading and sharing movies, music, programs, or any other copyrighted material. So when the MPAA or RIAA and their legal army come calling for their pound of flesh, they're coming after the owner of the WiFi network, and that would be you. But that's not where it stops, hackers use insecure WiFi networks to do their illicit activity without it being traced back to them - instead you'll be the one with the cops beating down your door. Speaking of hackers, once they're on your WiFi network, they'll have access to any computers on that network. From there, a skilled hacker can gain all sorts of your personal information, and unless you've been living under a rock the last decade or so, you already know how devastating identity theft can be.

Now let's say you sometimes need to "borrow" some 'net access from one of your neighbors. Then, suppose that neighbor didn't leave their network unprotected by mistake, but as a honeypot of sorts to lure you in. Once you're on their network, you're subject to whatever monitoring mechanisms they have in place. In fact, since many password (like standard e-mail) are transmitted in clear text, using an unencrypted WiFi may be the quickest way to get those passwords stolen. And you don't need to fear just the owner of the unencrypted WiFi - ANYONE on that network can compromise your computer's security. At the bare minimum, you should always have a good commercial Anti-Virus Progam (we recommend Kaspersky) and make sure your computer's Firewall is turned on. Or you spend a couple bucks on your own Internet service (AT&T's entry level DSL is about $15/month), and after reading this article, you're going to properly secure it.

So to sum up - secure your WiFi or the MPAA and the RIAA will sue you for tons of dough. If you steal WiFi, you're going to get hacked, your identity will be stolen, and it'll cost you tons more than you're saving by not having your own Internet connection. Well, probably not. In reality, both of you will probably be fine. In all honesty, it's not worth the risk.